Combined Federal Campaign (CFC)
CFC# 11324
Special Task Force
2011-2012
Chairman: Tom Burke
Members: Dick Southern
Herb Worthington
September 19, 2011
VVA/VSF CFC CAMPAIGN FOR VVA’s VETERAN
SERVICE OFFICER PROGRAM GETS UNDERWAY
The entire organization of VVA, National Board of Directors, State
Councils, and Chapters are requested to take on this effort. This campaign
should spearhead new milestones. States have different requirements to
participate in their own CFC events.
The task force needs and requests help from all of our members.
All State Councils that are receiving funds from VVA through the VSF need
to make the effort to participate in this year’s CFC Campaign. This IS a
requirement of receiving funds. State Councils who DO NOT have a
Veteran Service Officer program and no stake in the campaign, we also
request your help. Helping your fellow veterans is no easy task.
“Never Again Shall One Generation Of Veterans Abandon Another”
That is our founding principle. The Veteran Service Officer Program has
done much for many, but still much remains to be done. Most CFC
Campaigns should be underway now or just beginning. We urge you to
check out your nearest campaign contacts and get involved.
VVA, as an organization, must continue to make sure our Veteran Service
Officer Programs remain and grow and helping our fellow veterans.
The CFC Task Force wishes to thank all State Councils, Chapters and
VVA members, in advance, who will get involved in this year’s
campaign. We also need to thank the Officers of the Veteran Support
Foundation for their continued support.

You might want to blast this to your whole list. I just stopped to buy a couple of the Veteran’s raffle tickets and for each one you purchase between now and the 16th, you receive a free $5 mega millions lottery ticket.
The tickets I received were for this Friday’s drawing and after Friday they will be for next weeks drawing. It is great to see that the State is really promoting our raffle.
By the way, my raffle tickets were 61000 plus.
Gene Goldsmith

Please pass this around.

All veterans at the vet center and at the VVA are especially welcome out here in Sumas. Both dinners will be held from 5-89 PM at the Legion Hall, 134 Harrison Street in Sumas. Hope to see you there! 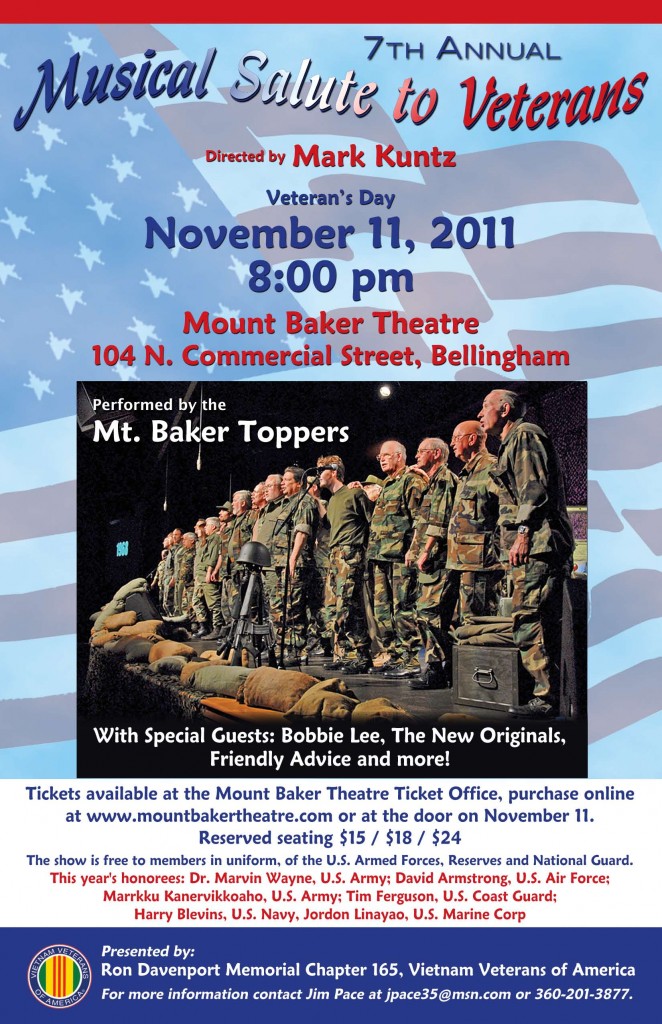 GREETINGS: I would like to introduce myself to you. I am Tom Owen your new VVA region 8 director. There are such large distances in our region much of our contact will be electronic.

I enlisted in the Army in 1966. I guess that is why the word greetings in large letters doesn’t bother me as much as some. After training at Ft. Gordon and Ft. Benning I was sent to Korea where I served for 6 months with the 2nd Inf. from 1/68 till 6/68. From there to Viet Nam from 7/68 to 7/69 where I served with a commo co. attached to the 1st Cav. at camp evans then at Tam My. I was trained in communications and inf. but I actually spent little time in either as my CO discovered I had quite a natural talent in procurement. I returned in July 69, 4 days before man walked on the moon.
From discharge till early 74 I pretty much refer to as a major bump in the road. I left the S. Cal. rat race, where the rats were winning, and moved to Orygun. I didn’t know alot about the use of chain saws, axes, wedges,or heavy equipment but I had a fair knowledge of explosives so I went to work in the woods. After a few years the opportunity came to partner with 2 others and we started our own logging company that logged with cats, skidders and specialized in logging with draft horses. We also had a tree planting crew and 2 professional foresters that did management planning. In 1981 I married Nadine and we used the horses to log the material and build our log home on 30 wooded acres.
In 1990 on one of my seldom trips to town I was struck by a speeding auto which pretty much ended my forest career. Not being able to do a lot of manual tasks I got a real estate brokers licence. { procurement talent don’t fail me now} My wife and I as a team, have now won several national awards in the real estate industry. Culture shock. From living in a tent in logging camps 6 months a year to dealing with people every day. I should have gone fishin but instead organized an annual concert series, free to the public, and chaired the committee for 14 years. When a position came open on the local planning commission instead of following my basic instinct to go fishing, put in an app. was chosen and served for nearly 12 years. 44months of that time was spent as a tech. advisor on a committee that re-wrote all the city planning and development codes.
I have been a chapter vp, pres. state council vp and pres. with the VVA. As the new director I would like to hear from you as to how we may accomplish the mission of VVA. Sharing ideas on how to raise $ is always a key issue as is being sure that we get everyone into the health care system. I would like to hear what your chapters are doing for exitement and how recruiting is going in your area.
I look foward to meeting with you all.