Pledge of Allegiance by: Dave Loomis

Invocation by & Moment of silence for POW/MIA by: Lonnie Rose

The VFW Post 1585 pig roast happens on 15 September, it is a fund raiser to help pay for the new accessible ramp to the basement.

On a picture-perfect Sunday morning, some participants arrived earlier than 7:00 a.m. for the Chapter’s big fund raiser, the 8th Annual Car Show. More than 350 vehicles registered and were shown at the large parking lot in Barkley Village. The vehicles ran the gamut from early vintage to late model. Some of my favorites were a white early model Ford, a late model Corvette, a late ‘60’s Camaro and a Willys Jeepster.

First, second and third place awards were given by decades, with pre-1920 to the present. A special award was given to the Vietnam Era as well as People’s Choice. The awards were presented on Victory Lane, under the car show banner.

Attendance was good, with many exhibitors remarking on the number of folks coming to view the cars. You should have been there… 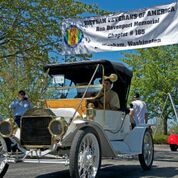 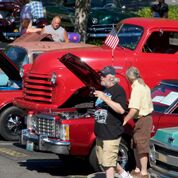 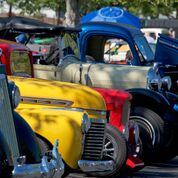 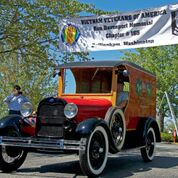 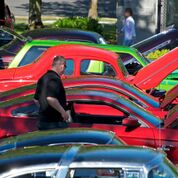 General Meeting called to order at: 18:50 by President Dave Loomis

Pledge of Allegiance by:

Invocation by & Moment of silence for POW/MIA by:

Secretary’s report: Supposedly reviewed on line by all the membership (that’s why it is posted), approved unanimously

Membership Update: no update this month

There will be a pre-show meeting at Barkley Center – the car show location on 17 July (Tuesday) at 18:00 (6:00 pm) to lay out locations and duties. We also need people with pickups to meet at the VFW on 21 July at 17:00 to load up tables, chairs, garbage cans, banners etc to take to the venue on Sunday morning.

Safety cones are being provided by Safety Signs Inc. Tape may be purchased. Pres. Loomis will issue an e-mail blast every week to recruit volunteers and alert members of the upcoming event.

Ms. Beck also spoke to establishing a scholarship endowment for veterans. One individual has pledged $10,000 and her office has a matching pledge bringing the total to $20,000. But WWU has a threshold of $25,000 to establish an endowed scholarship. So they are looking for another $5,000. The chapter will discuss at the next meeting the possibility of assisting in this endeavor.

For all who hunger:

Motion to adjourn: made seconded and approved at 19:45

Invocation by & Moment of silence for POW/MIA by: Lonnie Rose

Membership Update: none given this month

Ed S. had a list of tunes popular in 1968, on which we voted for inclusion on the show cd. The most popular number – “What Condition Your Condition Was In”.

14 June is Flag Day and the birthday of the U.S. Army

Next meeting is 3 July – remember it is 3 July the last chance we have to finish planning the car show. (And to volunteer for a job…)

Moment of silence for POW/MIA

VFW Post here breakfast 27 May 8:00 – 11:00, if ramp construction allows. (The parking and building may be torn up and unavailable).

Our own Richard Martinez will be discussing his time in VN at VFW Post 9301 (7011 Hannegan Road, Lynden) in a veterans services event. This occurs on Saturday, 5 May, noon to 3:00 pm.

Jim Pace shared that three members of his immediate family have died from Agent Orange associated illness. Be aware and if you suspect you were exposed go see him at the Vets Center…

That’s all I can recall…